These are my (un-revised) notes from the Organizational Behavior class at the Hong Kong University of Science and Technology. The text for the class was called Organizational Behavior by Stephen Robbins and Timothy Judge. I had the 15th edition. Hopefully I’ll come back to these notes sometime in the future, and when I do I’ll clean them up.

1. What is Organizational Behavior? #

Managers get things done through other people. They make decisions, allocate resources, and direct the activities of others to attain goals.

“Organizational behavior (often abbreviated OB) is a field of study that investigates the impact that individuals, groups, and structure have on behavior within organizations, for the purpose of applying such knowledge toward improving an organization’s effectiveness.”

Disciplines That Contribute to the OB Field

“Because people are different, we need to look at OB in a contingency framework, using situational variables to explain cause-and-effect relationships.”

OB is good for: 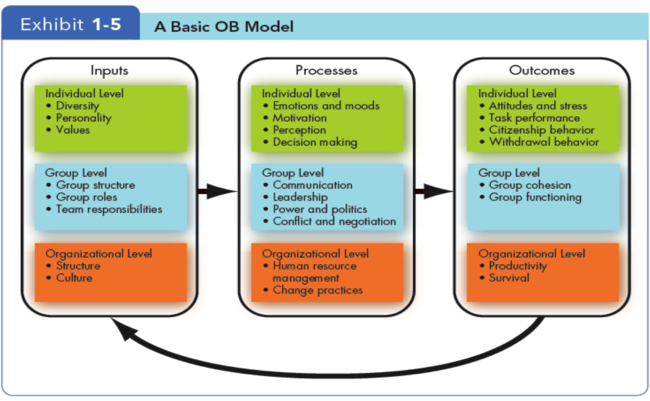 Other Personality Traits Relevant to OB

Perception => a process by which individuals organize and interpret their
sensory impressions in order to give meaning to their environment.

Self-fulfilling prophecy (or Pygmalion effect) describe how an individual’s behavior is determined by others’ expectations.

Self-Concept => An individual’s self-beliefs and self-evaluations

What Are the Main Components of Attitudes?

[!!! Cognitive Dissonance as a way of learning about yourself]

Job Satisfaction => A positive feeling about one’s job resulting from an evaluation of its characteristics.

Affect => A broad range of feelings that people experience.

[!!! pg 101 diagram of classifications of mood along two positive and negative dimensions]

Positivity offset => The tendency of most individuals to experience a mildly positive mood at zero input (when nothing in particular is going on).

Sources of Emotions and Moods

“We estimate people to experience more positive emotions than they do.”

Emotional intelligence (EI) => a person’s ability to (1) perceive emotions in the self and others, (2) understand the meaning of these emotions, and (3) regulate one’s emotions accordingly in a cascading model

What is Organizational Behavior? #

Situation strength theory => the way personality translates into behavior depends on the strength of the situation (e.g. the degree to which norms, cues, or standards dictate appropriate behavior)

Trait Activation Theory => some situations, events, or interventions “activate” a trait more than others.

Motivation is the processes that account for an
individual’s initiation (arousal), direction (focus), intensity (level of effort), and persistence (in face of failure/setbacks) of effort toward attaining a goal

“Perception is a process by which individuals organize and interpret their sensory impressions in order to give meaning to their environment.”

Attribution theory tries to explain the ways in which we judge people differently, depending on the meaning we attribute to a given behavior. It suggests that when we observe an individual’s behavior, we attempt to determine whether it was internally or externally caused. That determination, however, depends largely on three factors: (1) distinctiveness, (2) consensus, and (3) consistency.

Common Shortcuts in Judging Others #

Because we can’t observe everything going on about us, we engage in selective perception.

halo effect => When we draw a general impression about an individual on the basis of a single characteristic, such as intelligence, sociability, or appearance.

contrast effects => We don’t evaluate a person in isolation. Our reaction is influenced by other persons we have recently encountered.

stereotyping => When we judge someone on the basis of our perception of the group to which he or she belongs.

self-fulfilling prophecy, Pygmalion effect => how an individual’s behavior is determined by others’ expectations.

Decision making occurs as a reaction to a problem. That is, a discrepancy exists between the current state of affairs and some desired state, requiring us to consider alternative courses of action.

bounded rationality => many problems don’t have an optimal solution because they are too complicated to fit the rational decision-making model. So people satisfice; they seek solutions that are satisfactory and sufficient.

We define a group as two or more individuals, interacting and interdependent, who have come together to achieve particular objectives.

Ingroup favoritism means we see members of our ingroup as better than other people, and people not in our group as all the same.

status characteristics theory => status tends to derive from one of three sources:

Groups versus the Individual #

groupthink describes situations in which group pressures for conformity deter the group from critically appraising unusual, minority, or unpopular views

interactionist view of conflict encourages conflict on the grounds that a harmonious, peaceful, tranquil, and cooperative group is prone to becoming static, apathetic, and unresponsive to needs for change and innovation

Problem-Solving Teams => authority to unilaterally implement any of their suggestions

Cross-Functional Teams => made up of employees from about the same hierarchical level but different work areas, who come together to accomplish a task

What Factors Determine Whether Teams Are Successful #

reflexivity => reflect on and adjust their master plan when necessary

communication includes both the transfer and the understanding of meaning

Nonverbal Communication:
body language conveys: (1) the extent to which we like another and are interested in his or her views and (2) the perceived status between a sender and receiver

Rumors emerge as a response to situations that are important to us, when there is ambiguity, and under conditions that arouse anxiety.

high-context cultures such as China, Korea, Japan, and Vietnam, people rely heavily on nonverbal and subtle situational cues in communicating with others, and a person’s official status, place in society, and reputation carry considerable weight. What is not said may be more significant than what is said.

Distortions, ambiguities, and incongruities between verbal and nonverbal messages all increase uncertainty and reduce satisfaction.

Trait theories of leadership focuses on personal qualities and characteristics.

Leaders who like being around people and are able to assert themselves (extraverted), who are disciplined and able to keep commitments they make (conscientious), and who are creative and flexible (open) do have an apparent advantage when it comes to leadership

Another trait that may indicate effective leadership is emotional intelligence (EI)

“traits do a better job predicting the emergence of leaders and the appearance of leadership than actually distinguishing between effective and ineffective leaders.”

behavioral theories of leadership implied we could train people to be leaders.

Fiedler contingency model proposes that effective group performance depends on the proper match between the leader’s style and the degree to which the situation gives the leader control.

Situational leadership theory (SLT) focuses on selecting the right leadership style contingent on the extent to which followers are willing and able to accomplish a specific task.

(now on to contemporary leadership theories)

The best leaders are transactional and transformational.

Characteristics of Transactional and Transformational Leaders (from transaction to transformative)

servant leadership => leaders that go beyond their own self-interest and focus on opportunities to help followers grow and develop.

Substitutes for and Neutralizers of Leadership

Pretty good two weeks for new music. The highlights are definitely Overflow and Re.Up, but Rumble in the Park and Daye Jack have enough intrigue to warrant a listen, and it’s hard to be unhappy with anything RAC does. 1. Back of the Car... Continue →